Tax deadlines are a stressful event in everyone’s calendar. Have you ever stopped to wonder how much revenue tax generates or who pays the most tax? We take a look at 20 of the most interesting tax statistics and what they mean for the US government. 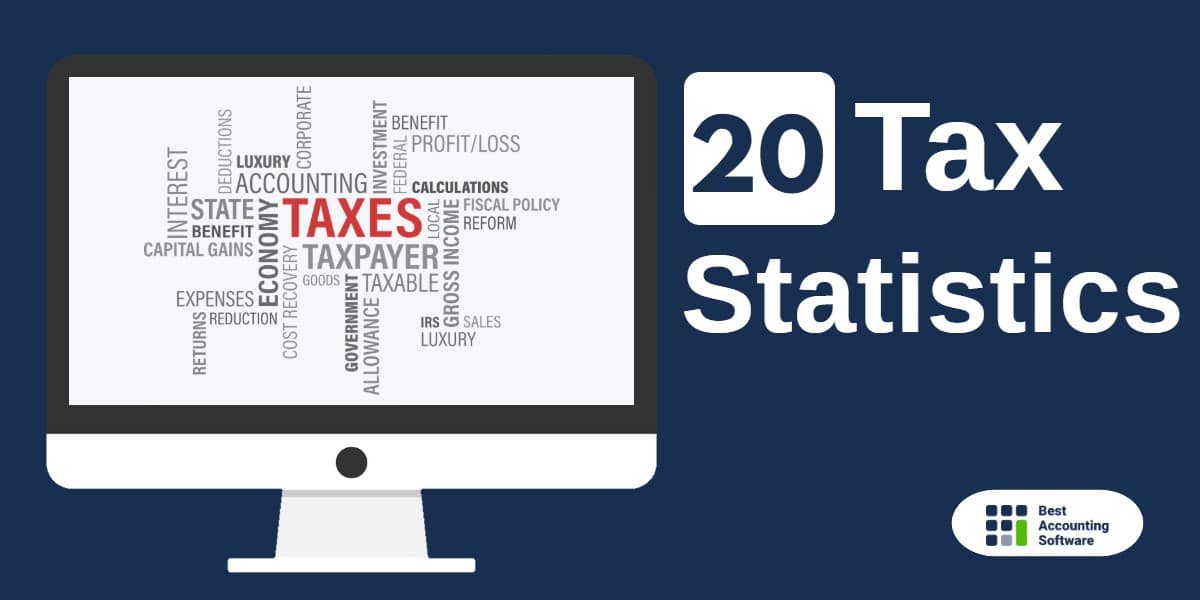 Tax day. Each year, Americans scramble to meet the deadline. In 2018, the IRS fielded $136,359,149 returns via 1040 Forms. Even though most people despise paying taxes, or are at best indifferent to it all, some tax statistics can be quite interesting!

You know the taxes they withhold from your payroll? Ever wondered how much all that money adds up to? Well, your question has been answered: in 2019, payroll tax revenues amounted to $1.24 trillion, and the 2020 total is projected to be $1.31 trillion. That’s double what it was in the year 2000 ($652.9 billion). Of course, payroll taxes don’t just come from what is withheld from employee salaries. Employers have to pay an additional tax on employee income—one which does not come out of employee salaries. 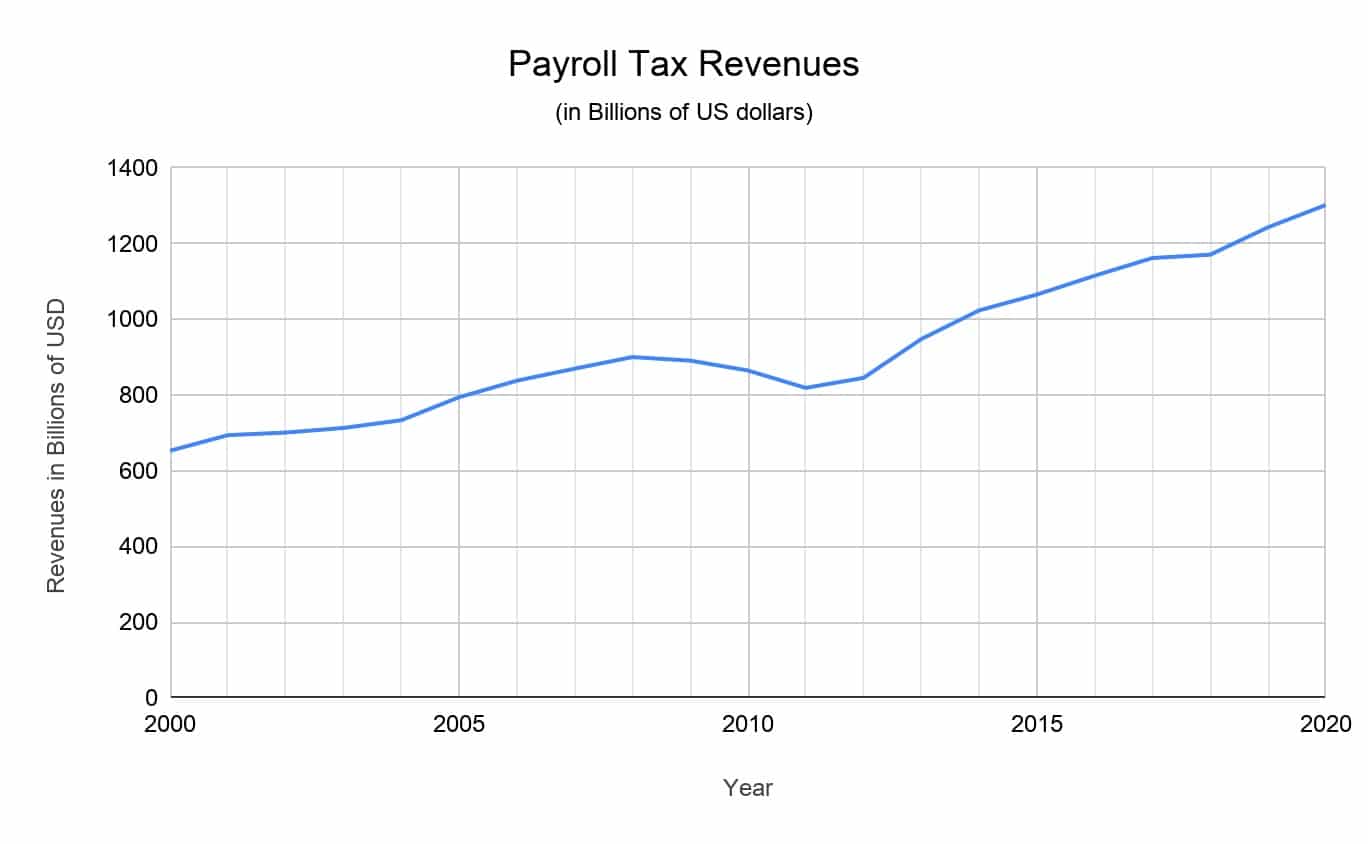 2. The average amount of a tax return has gone up since 2008—with a catch

3. To save that refund, or to pay off debt? That is the question

In 2009, as the “Great Recession” was winding down, 48% of consumers surveyed by the National Retail Foundation planned to use their tax refunds to pay down debt, while 39% intended to save theirs. In 2020, with the COVID-19 recession looming, the tables turned, and 50% of consumers reported that they’re planning to save their refunds, with only 34% planning to pay down debt. It will be interesting to see what happens in 2021 as the economy (hopefully) begins to recover and Americans (hopefully) are freed from isolation.

In a national tracking poll conducted by Morning Consult in August 2018, 55% of respondents reported they make less than $50,000 a year before taxes, while 33% reported being in the $50,000 to $100,000 range, and 11% said they made more than $100,000. What this means depends upon where you live in the United States. Let’s say you’re a family of four bringing in exactly $50,000 a year while living in Los Angeles. Using Pew Research Center’s handy dandy calculator, you will find that you are in the lowest of three tiers economically. If you can hold onto that $50,000 a year income and move your family of four to, say, Louisville, Kentucky, you can move up to the middle tier!

Probably unsurprisingly, the top 1% of income earners in the United States paid a grand total of 37.32% of the nation’s income taxes in 2016. The top 10% paid 69.5%, and the top 50% paid 97% of the country’s total taxes on income. Given that these groups make exponentially more money, this really isn’t that shocking. Whether those top earners are paying too much or too little is a heated debate…. 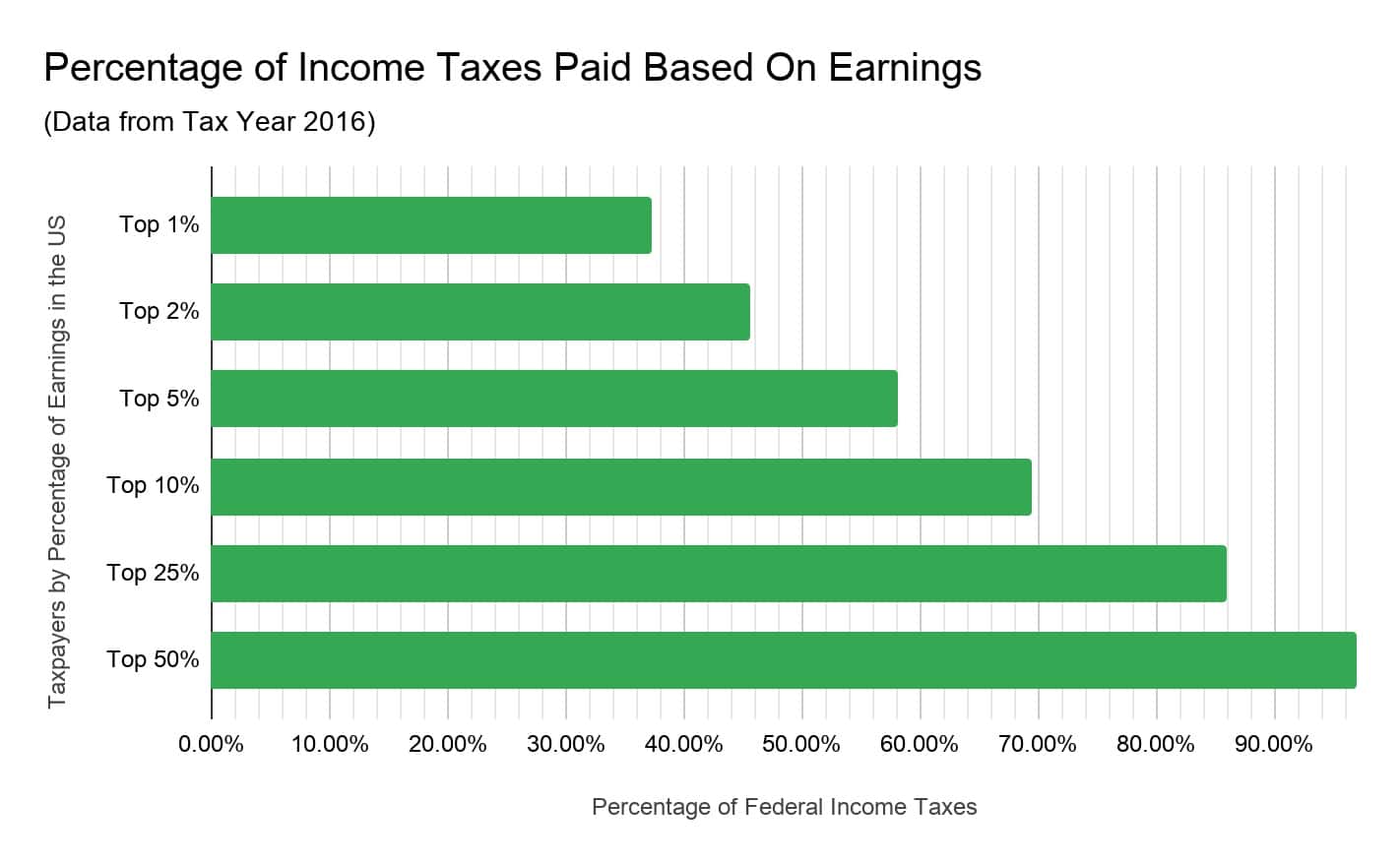 In response to a survey conducted by the Statista Research Department asking which income groups pay “too little, too much or their fair share in taxes,” 58% of respondents replied that upper income individuals in the United States are not paying enough in taxes; Pew Research Center got the same results.

7. 79% of Democrats and 37% of Republicans believe the rich aren’t paying enough in taxes

Or 71% of them think so anyway, a Pew survey found in 2018. Specifically, Americans expect you to pay “all the taxes you owe.” However, voting in elections took the top prize in the good citizenship stakes at 74% in the survey, while obeying the law came in third at 69%. Given the grumbling we hear around tax time, it was surprising to see paying taxes in the top three!

Revenue generated from taxes on tobacco production and sales increased dramatically in 2009, from $7.64 billion in 2008 to a whopping $12.841 billion in 2009 (nearly doubling!). In 2010, the amount increased again to $17.16 billion—an increase of 224%. An unprecedented increase in the federal excise tax on cigarettes in 2009—with states following suit—led to an overall increase in taxes on cigarettes to $2.21 per pack. Currently, the U.S. median for tobacco tax is about $1.70 per pack, but advocacy organizations think it should be even higher. 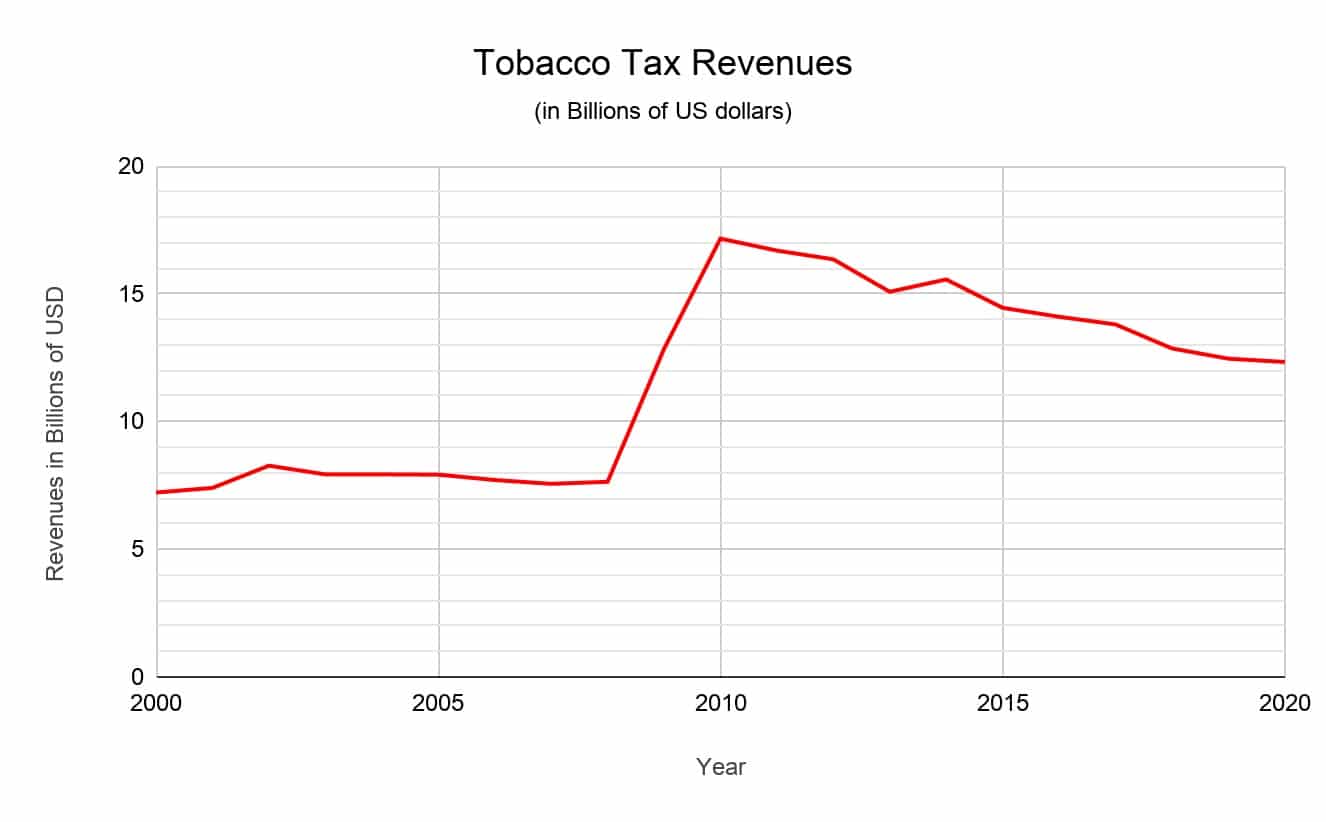 Yep, you read that right. Revenue from taxes on alcohol generated $9.99 billion in 2019. That pays for almost half of the budget of NASA ($22.6 billion). It’s not as much revenue as tobacco taxes (as mentioned above), but it’s still a ton of money. What’s more, though revenues have risen by over one billion dollars since 2000, the growth rate has been relatively slow, and the federal excise tax applied to alcohol represents only a fraction of the GDP. 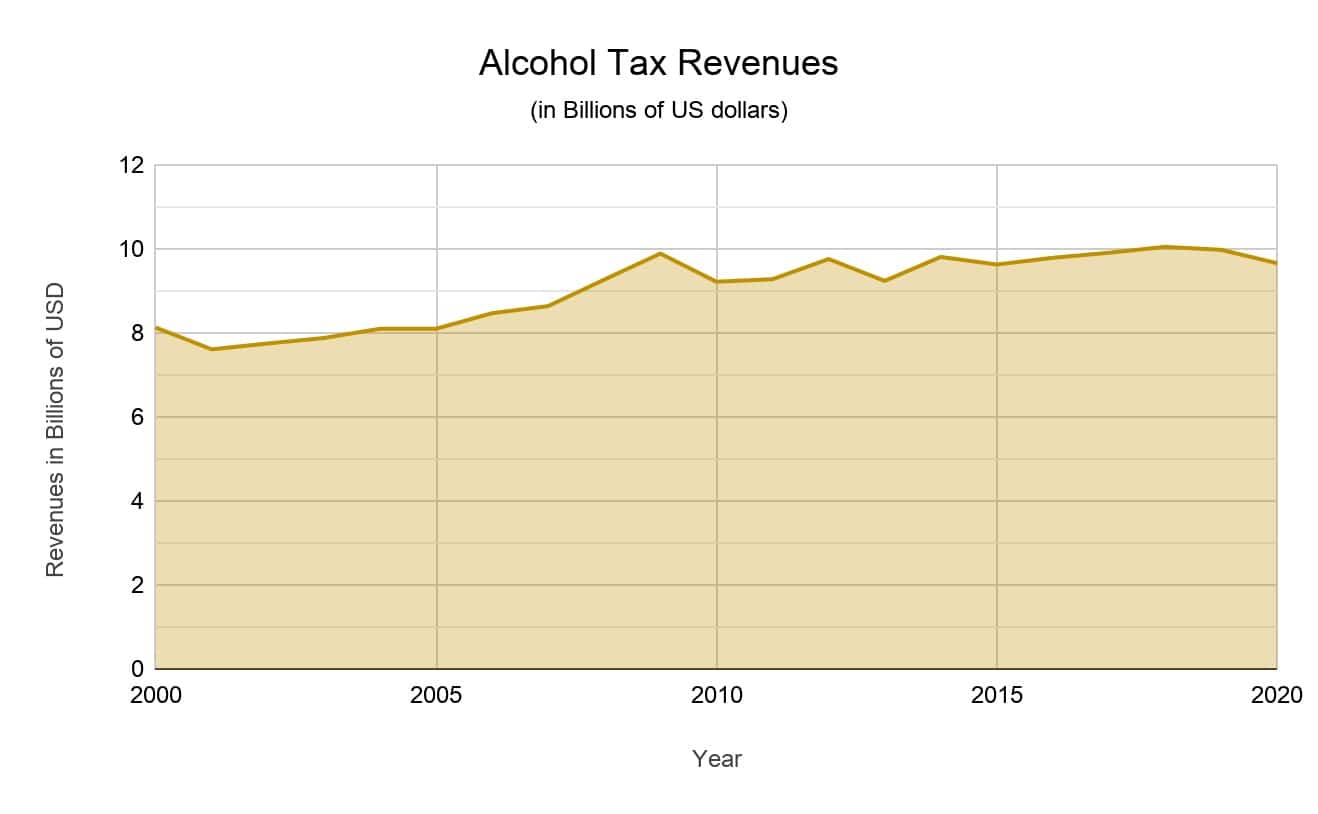 11. Tax revenue on telephones has fallen to less than a tenth of what it was in 2000

12. State governments collected more than a trillion in taxes

In 2018, state governments collected approximately $1.03 trillion in taxes. That’s more than the GDPs of all the countries of the world except the top 15.

13. California rakes in more than double the tax revenue of New York

In 2019, California pulled in a little over $188 billion dollars in tax revenue, more than double the haul of the state with the next highest tax revenue—New York at $91.6 billion. New York, in turn, took in $28 billion more than Texas (just over $63 billion), the next state, and Texas took in $18.5 billion more than Florida (at almost $45 billion). The reasons for this are simple: California’s economy is huge (it generates 14.5% of the entire country’s GDP), and its base sales tax and income tax are the highest of any state in the union.

14. Colorado makes $20 million per month in revenue on taxes of cannabis

Brings a whole new meaning to that John Denver song “Rocky Mountain High,” doesn’t it? In 2019, Colorado made over $20 million per month in taxes on sales, fees, and licenses for cannabis, with a high of $29.75 million in September. All told, Colorado made a little over $302 million in 2019 on legalized cannabis. That’s equal to 2% of the revenue Colorado generated in federal income taxes. 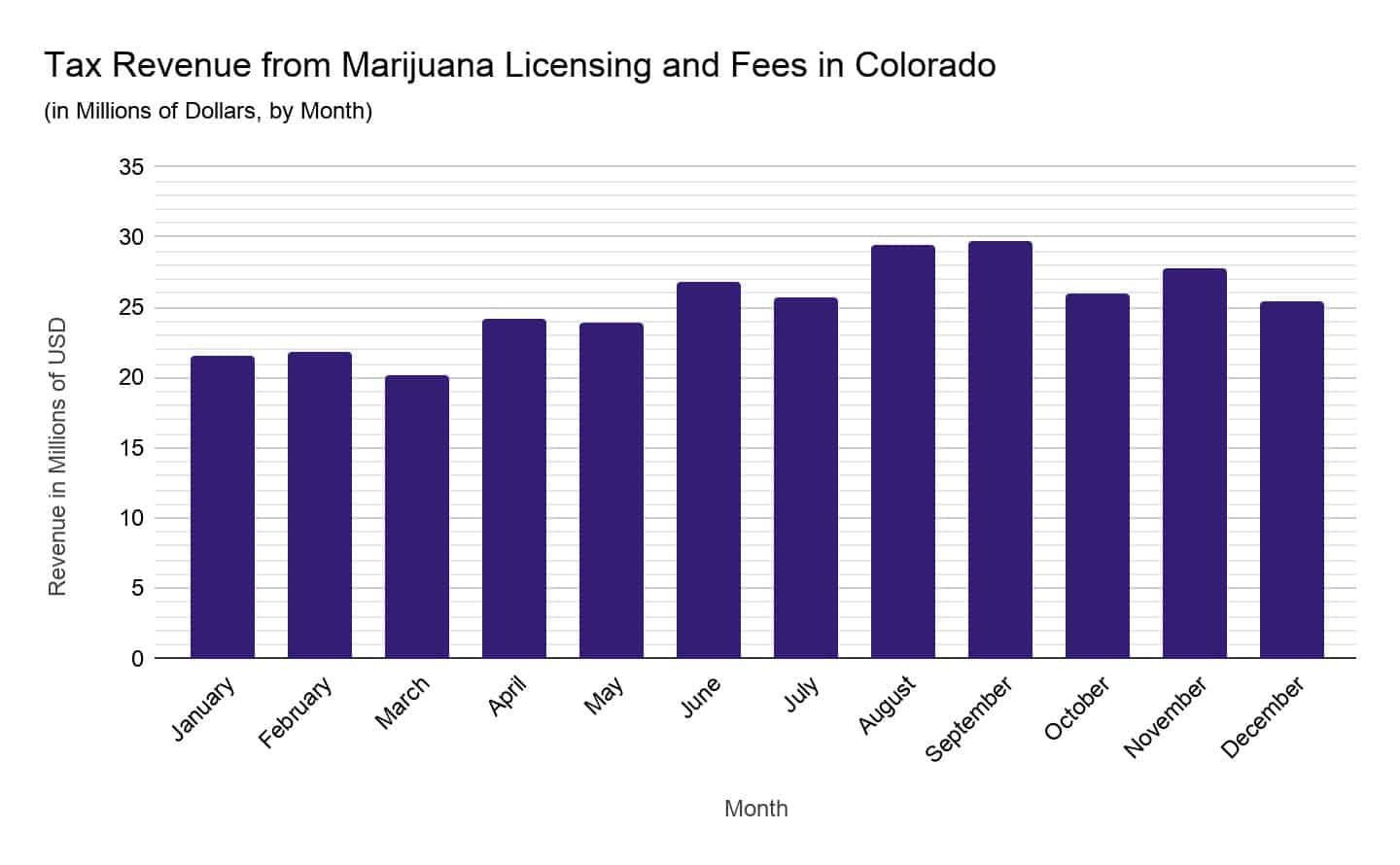 All those little charges add up to quite a bit. State and local general sales taxes generated over $570 billion in revenue in 2017. General and selected sales taxes have generated an increasing amount of revenue since 1977. If this were federal revenue, it would be enough to pay for the entire Medicaid program ($409 billion in 2019) and then some. 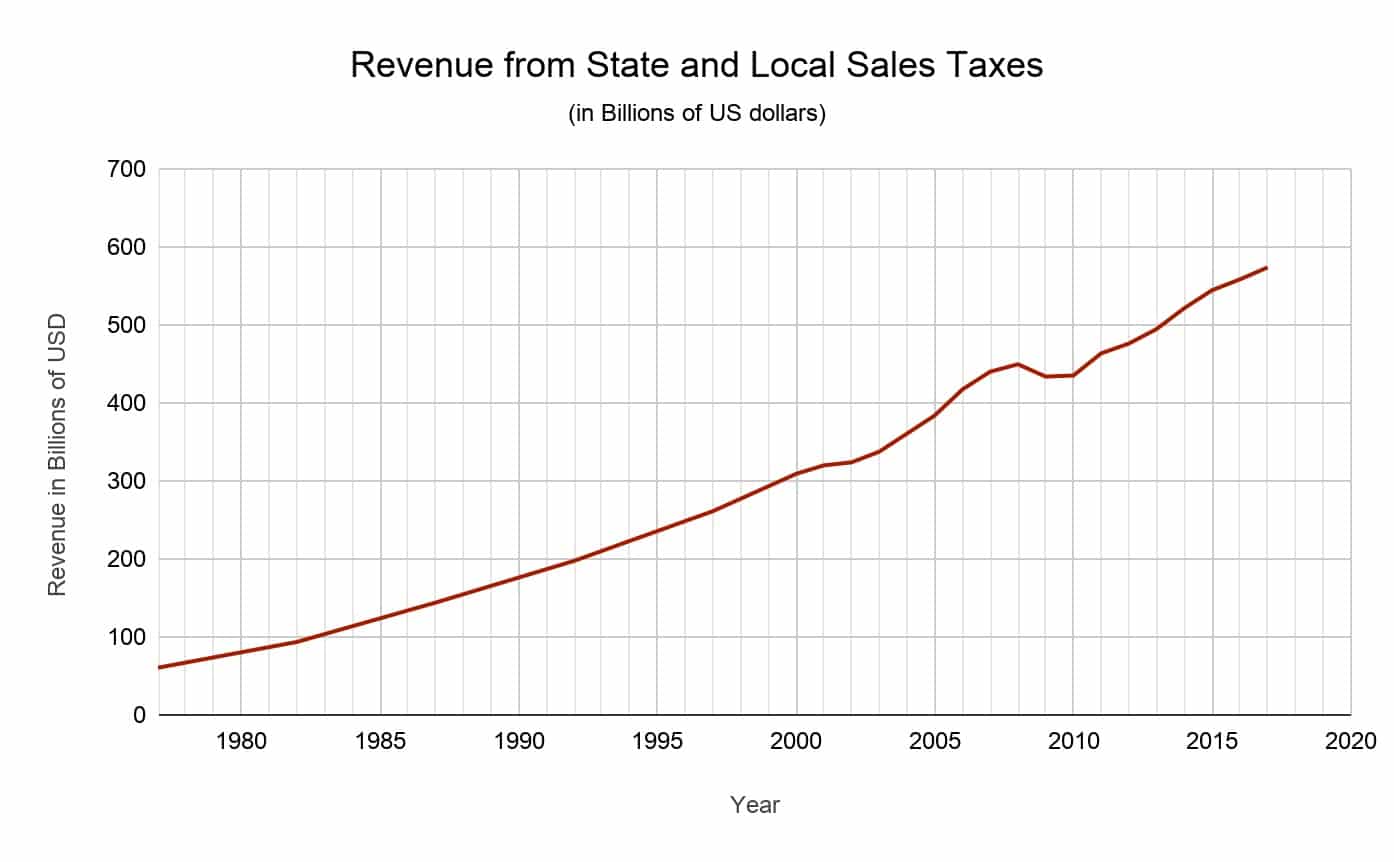 16. Americans are upset that corporations don’t pay their fair share in taxes!

A 2019 survey by Pew Research Center revealed that 62% of Americans say it bothers them “a lot” that “corporations don’t pay their fair share” of taxes. Small wonder because the list of corporations that paid no federal taxes in 2018 is long.

17. Of the 50 largest US companies, ConocoPhillips paid the highest effective tax rate

From the period between 2008 and 2014, ConocoPhillips paid the highest effective tax rate of any US-based company, at 65.8% of their income, according to the Statista Research Department. Citigroup paid the lowest, at -91.7%, meaning they received more money from the government than they paid. Two other companies received more from the federal government than they paid: Ford Motor Company and General Motors, at effective tax rates of -34.6% and -45.5%, respectively.

19. A negative effective tax rate is a thing 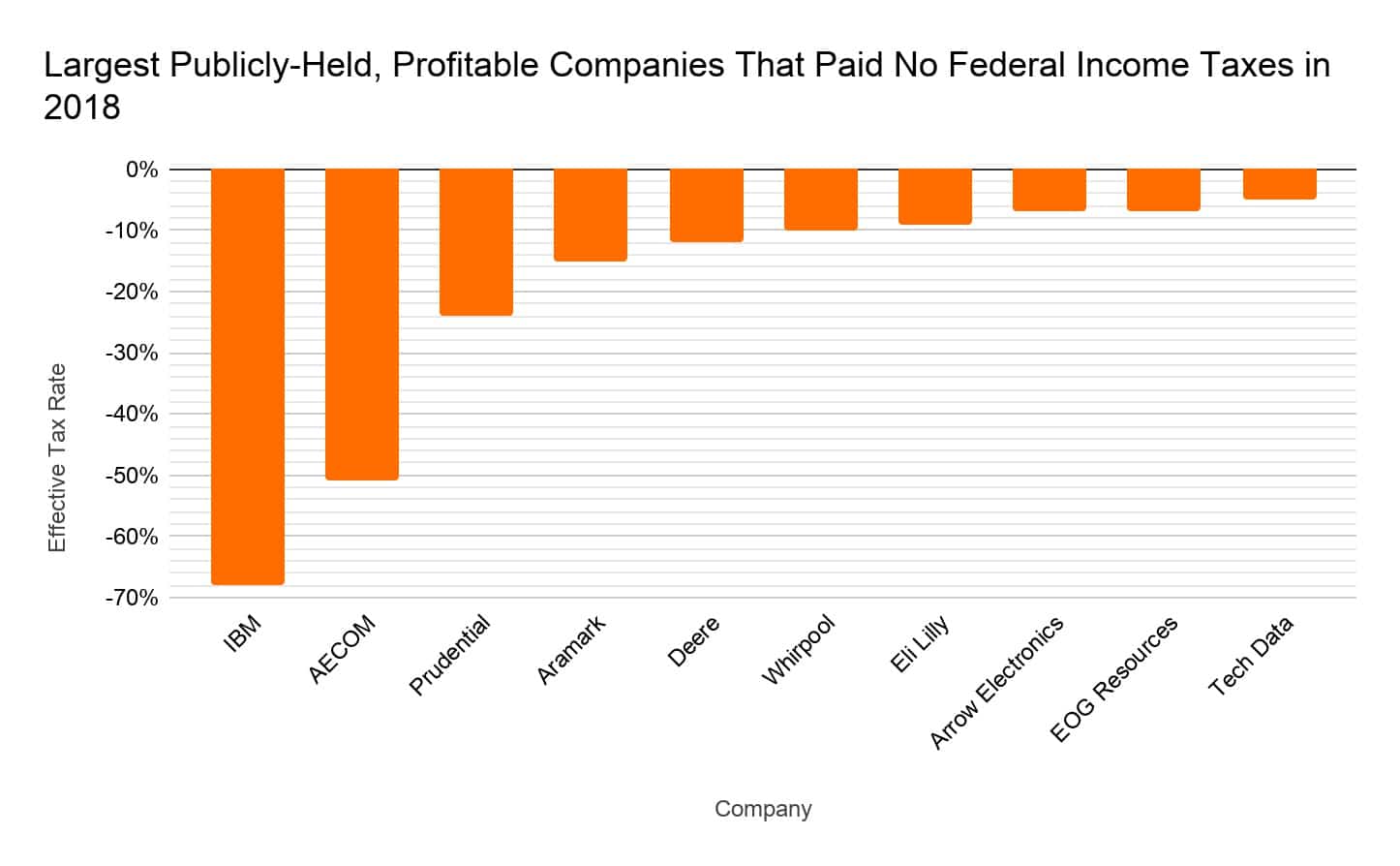 20. More than half of Americans have a favorable view of the IRS 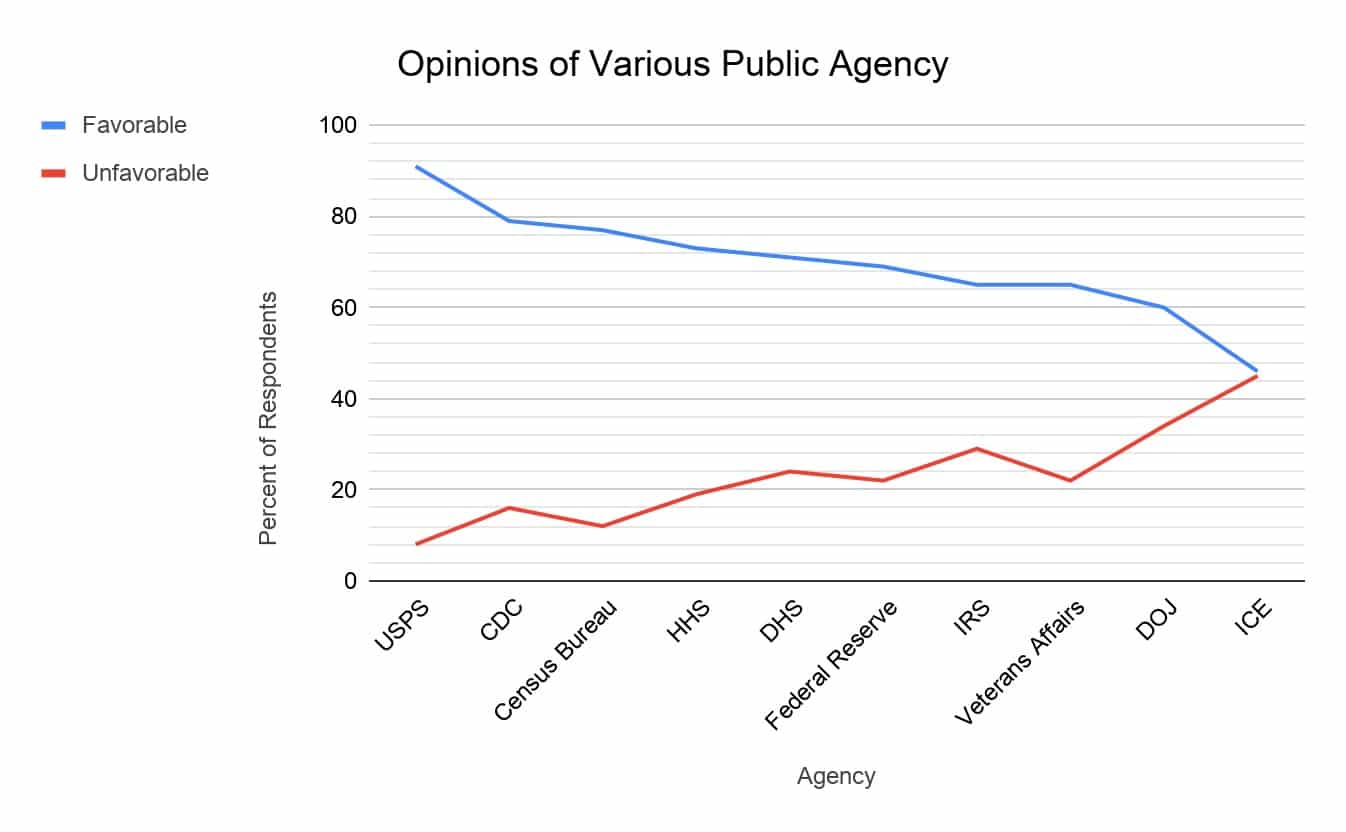 Taxes may seem like a chore and basically drudgery, but on the bright side, they do yield some interesting facts if you like your knowledge random. Chasing tax statistics can take you down the rabbit hole quickly. With all the different taxes to be paid and separate local, state, and federal tax policies, there’s a lot that goes into generating revenue for the government. 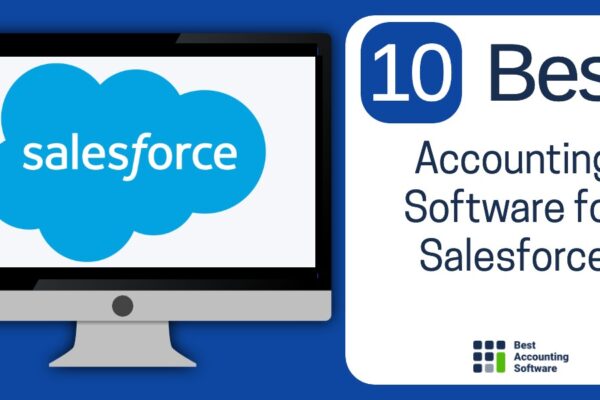 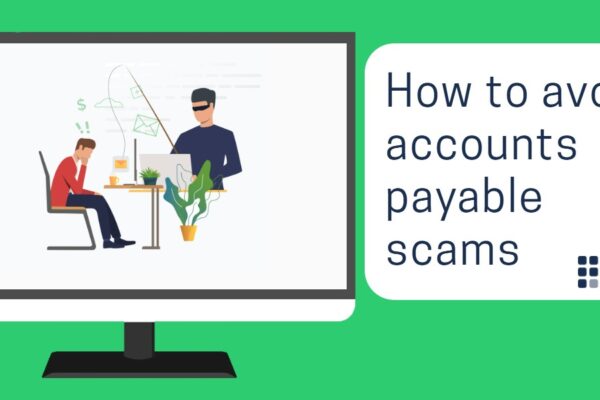 How to spot and avoid accounts payable fraud in 2020 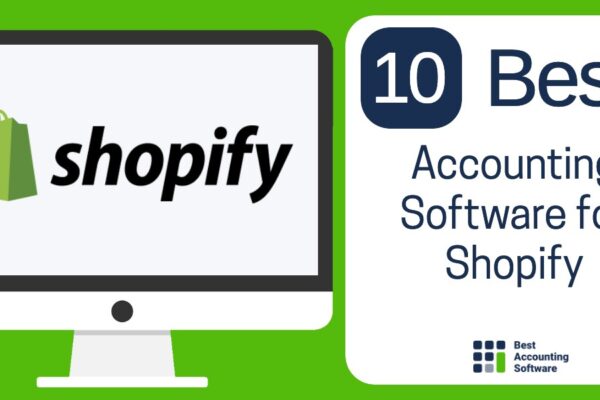